announcing that the league may not permit its players to play in the 2018 Winter Olympics in PeyongChang, So. Korea.

“As things stand today, you should assume we’re not going,” he said.

As of right now,the league’s concerns about sending their players to the games are in regards to the International Olympic Committee not covering costs for players to go as well as shutting down the league for three weeks so that marquee players risk injury to play for their respective countries.

“If nothing changes, I don’t see anybody participating,” Bettman said. “If somebody proposes something that’s pragmatic, that’s radically different, that gets the attention of the clubs where they say, ‘You know what, we don’t like going, but on balance it’s worth it because of this,’ we’ll have to look at it again.”

I honestly feel like this is a snub for the league and its players because what are the Olympics all about? They’re about representing your country in these respective games,and seeing these players play international-rules Olympic hockey is a beautiful thing. It’s one of the few things I like about any of the Olympic games (winter or summer).

I think if Bettman and the NHL decide to take a pass on next year’s games, they’re doing themselves,and the fans, a big disservice.

WARNING: The next image is very graphic and not for the weak-stomached, you’ve been advised! 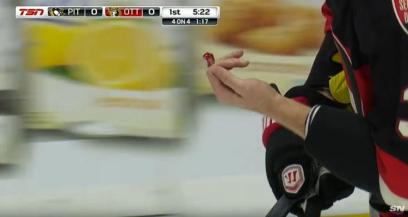 Continuing with hockey and the controversy surrounding Pittsburgh Penguins star Sidney Crosby and his slashing of the finger of Ottawa Senators defenceman Marc Methot in the first period of Thursday’s game. Crosby did not receive a penalty for what occurred. Methot did not return to the game.

Some are calling for Crosby to be suspended,including the owner of the team whose guy got injured, Eugene Melnyk of the Ottawa Senators.

He added, “You do anything that’s almost a certain injury, and I think the only way you do it is you wipe the guy off the map … not one or two games — 10. How about a season for a few of these guys? I mean, really. He takes my guy; I take your guy. That’s my attitude. The guy who creates the injury, they should watch games together for the rest of the season. That’s the kind of attitude I have. There’s no room for that.”

“…That’s the only way you do it. You hammer these guys, and you take away their money because they all understand money. And you say, ‘You’re done for 10 games.’ And guess what? You guys aren’t getting anywhere close to winning the Stanley Cup if it’s an elite player on the other side. There’s no room for it in the NHL.”

I understand Melnyk’s frustration,I do. One of his guys basically got his finger chopped off by one of the league’s best players. And while I do think there should be some sort of punishment for Crosby for what happened, a full season is too severe. I don’t think Crosby’s intent was to chop this dude’s finger off. I didn’t think his slash was malicious whatsoever and was just a freak accident. This is a dangerous game where I’ve seen guys get unintentionally slashed in the throat with skate blades. Freak injuries happen in this sport, it sucks,but it happens.

the league looks like they’ll be taking extra steps to avoid this in the future.
NBA commissioner Adam Silver sent a memo to all 30 teams on Monday. In it,he stresses that the issue of resting players,especially for games on national television is “an extremely significant issue for our league” and says that teams will face “significant penalties” if they fail to comply with league rules with reporting injuries and illnesses.

“Under current league rules, teams are required to provide notice to the league office, their opponent, and the media immediately upon a determination that a player will not participate in a game due to rest. Failure to abide by these rules will result in significant penalties,”said Silver in the memo.

He also mentioned that this issue will be addressed in league meetings for the Board of Governor’s on Apr. 6.

Meanwhile,a former NBA star had some strong words about this topic.

“If you don’t have at least 10 years experience, get your ass playing,” Malone said. “It’s not work — it’s called playing. Besides, tell our underpaid service members and police and first responders to rest. They can’t.”

Malone played all 82 regular season games in nine of his 19 seasons and 80-plus in 15 of those years.

Malone is 100-percent absolutely fucking correct. These guys are playing a game and getting paid a shitload of money to do so. I’m getting so goddamn tired of hearing about how tired these players are. Guess who else is tired, me! I have to travel 60 miles daily to and from my job that in all honesty isn’t making me happy or satisfies me very much right now. That alone exhausts the shit out of me. But guess what? I have a job to do five days a week and 82 games out of the year these players have a job to do,too. So spare me with these milquetoast excuses for why these guys can’t play. They knew what they signed up for when they declared for the NBA Draft as 19-year-olds.

I appreciate that this is an issue that Silver wants resolved,but it resolves itself if players grow a pair and get out on the basketball court to do their jobs. 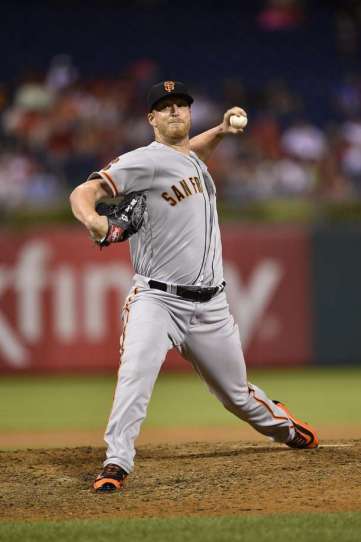 to Tommy John surgery. He will miss the 2017 season.

According to ESPN, the left-hander, who was projected to pitch the eighth inning for the Giants this season, made the decision to have the procedure in Los Angeles after consulting with doctors this week. He said he opted to have the procedure over rehab so as to not risk missing even more time.

Smith was acquired at the trade deadline in 2016 for the Giants and recorded a 3.35 ERA with 48 strikeouts in 40⅓ innings.

While it sucks that the Giants will miss Smith this year,one of the things this team does well is develop quality pitching and I have no doubt that this will continue and I hope that somewhere within this team’s system a guy can step up and fill the void Smith leaves behind. Sure,it’ll be hard,but I know it can be done.

See you next time!