We begin Odds & Ends this week with more of the Kings and their questionable draft.

If people who were okay with the draft are wondering why I am so upset about it,it’s not exactly the players the selected that I’m mad about (except for Malachi Richardson,a wing player who doesn’t shoot well. Yeesh!), it’s how the team went about the draft that bothers me that fueled their continued perception nationally that this team is run badly and are continuing to be the laughingstock of the NBA.

Now,should I put a lot of stock into how the rest of the country feels about this team based on selections they made in what is being considered a weak draft? Of course not! But that’s been the perception for many years now ever since the current ownership group has come in,to the point of embarrassment.

If this team wants to get stronger in terms of their team getting better,getting respect nationally,and even getting some of their fans back from the Warriors, they need to bust ass in free agency in ways we’ve never seen before. Vlade Divac,you’re on the clock.
Derrick Rose was traded to the New York Knicks on Wednesday for Jose Calderon, Jerian Grant,and Robin Lopez. Justin Holiday and a second round pick for next year joined Rose in the trade.

After winning the league MVP award in 2011,Rose has fought the injury bug constantly,leading many fans (myself included) to declare how fragile he is by saying he’s made of glass. I’ve even questioned his heart when in 2013, a perfectly healthy Rose failed to participate in any of his team’s postseason games,which may have cost them a championship.

I hope Rose does well with the Knicks,I really do. I know I’m hard on the guy,I do and I understand how hard it’s been for him to return to his former self,even a shell of that. Maybe this is a change of scenery he needs and maybe he’ll help the Knicks get back to where they used to be. Only time will tell.

The NHL Entry Draft was held on Friday and Saturday and while everyone knew that Auston Matthews was going first overall to the Toronto Maple Leafs, it’s who the Columbus Blue Jackets passed on that’s being talked about.

Jesse Puljujarvi of Finland was regarded as one of the best forwards in the draft and was expected to either go second or third in Friday’s opening round of the draft. The Winnipeg Jets selected fellow Finnish forward Patrik Laine, while Columbus shocked many by not selecting Laine’s fellow countrymen, instead selecting Canadian forward Pierre-Luc Dubois.

Puljujarvi was then selected by the Edmonton Oilers with the fourth pick,to the delight of long suffering Oilers fans. As one of those long suffering fans,I love this pick. This kid can score,he handles the puck very well and is known for his size,speed,and skill.

This was an excellent pick-up for Edmonton because Connor McDavid basically has his Jari Kurri in this guy. I am anxiously waiting for these two to team up because I think they’ll be a great combo on the same line together. I’m so glad the Oilers didn’t trade away this pick as was speculated because they got the right guy at the right pick. Jesse,I hope you have a great career and I hope Columbus feels they made a mistake by passing on you. Let’s do some winning!

The annual Bay Bridge Series happens to be this week between the San Francisco Giants and the Oakland Athletics and this is clearly a tale of two teams going in opposite directions. And yes,it’s a rivalry. 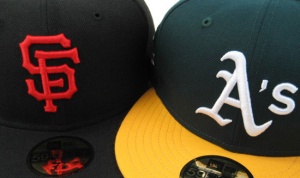 The Giants are currently owners of the best record in the National League at 49-28 and have gone 32-10 since May 11. Not to mention they’re doing it without key players such as Hunter Pence and Sergio Romo and the shakiness that is Santiago Casilla,their closer. I can only imagine this team getting better once Pence,Romo,and others return to the team’s line-up (and possibly the trade deadline may bring the team some help as well).

The A’s meanwhile are 32-43 and near the bottom of the AL West and are near the bottom in terms of attendance for the season (28th). They haven’t really been in any sort of playoff race and it’s likely that players like Sonny Gray,Sean Doolittle,and Danny Valencia will be sold to the highest bidders before the trade deadline hits. There has been talks of the team giving Josh Reddick a contract extension,but that can’t be the case because the A’s don’t do that for anyone.

So,why is it a rivalry? Because Giants fans want nothing better than to beat the A’s and show their fans (and maybe Lew Wolff) what a well-run baseball organization looks like rather than the major league equivalent of a minor league farm team. It’s also bragging rights for the whole region. A’s fans want to pretend that everything is okay and they’ll bring up the four World Series championships they won back in the Stone Age, and they’ll really bring up 1989 a lot this week to try and see if that stings Giants fans at any point (Spoiler alert: it doesn’t), but the fact of the matter is that the A’s haven’t won shit in over 25 years and if ownership and management doesn’t change the way they do things, not just a little,but a lot, then you can expect the A’s to be looking up at the Giants continuing to celebrate title after title while cleaning up runaway sewage in the team’s dugout.

Yes,it’s a huge rivalry,and by the way,I’m going to really wonder where all these damn A’s fans came from when I hear “Let’s Go Oakland” chants at AT&T Park. If you can’t help sell out your own ballpark first,don’t come to ours.

Finally,we need to give a memo to BART and the commercials regarding how BART-able the A’s are. That memo is: Nobody cares!

We get it,there’s a BART station at the Coliseum and it’s a great way to get to an A’s game, but here’s the problem, nobody goes to A’s games. As I mentioned in the last segment, this team is 28th in attendance. Do you think a commercial about them being close to mass transit (during a fucking Giants game,no less) is going to get these lazy,uninterested fans, to see a team that isn’t winning and that ships out players faster than the Bernie Lean stayed past the 2012 season?

Let’s just face it, more people are Giants fans because they know what they’re doing and know who’s actually on their team. You rarely see an A’s fan wearing a current player’s jersey because they don’t stay around long. That’s why you have more Giants fans and some 30 second spot about a team being near mass transit is not going solve attendance problems and/or lack of interest.

I hope the Sacramento Kings receive that message sooner than later. That’s Odds & Ends for this week.