We begin our special NFL Draft Edition of Odds & Ends with the first overall selection of the Los Angeles Rams,Jared Goff.

The Cal quarterback going first was not much of a surprise considering the Rams traded up to this spot with the Titans and it was pretty much a given once rumors came out that they were in favor of him over Carson Wentz. I think they got a great quarterback of the future in Goff. He has a great arm and can even get himself out of trouble with his legs. Plus,his name will generate buzz and ticket sales in Los Angeles.

Will he be the starter the first week of the season? It depends on which quarterbacks are on the roster. I’ve heard that Nick Foles may be on the trading block (hint,hint,49ers!) leaving Case Keenum and Sean Mannion,so it’s a possibility. I see Foles being moved and Keenum starting at first before Goff taking over at some point in the season.

OK,so I had to work a little later than usual on Thursday so I missed the announcements of the first four picks. While driving 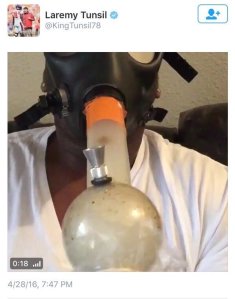 home from work I got caught up and heard about a picture of Ole Miss offensive tackle Laremy Tunsil circulating on the internet from his own Twitter account with him wearing a gas mask and smoking weed with a bong attached to it being the talk of the draft. Not to mention it more than likely caused many teams who needed offensive linemen to pass on him. San Diego drafted Joey Bosa,Baltimore drafted Ronnie Stanley, San Francisco decided to draft defensive end DeForest Buckner,Tennessee traded up with Cleveland to take Jack Conklin (who probably would’ve slid to them at 15th if the whole thing never happened) before Miami ended Tunsil’s slide by taking him 13th overall.

It didn’t stop there,on Tunsil’s Instagram account a text exchange with an Old Miss athletic director requesting money so that his mother could pay her utility bill. Tunsil has claimed that both his Twitter and Instagram accounts were hacked.

I was stunned to hear about all of this. Early on I had this young man being taken first overall by the Titans before the trade with the Rams occurred and had him mocked to Baltimore at the sixth spot. If he was hacked,it’s an unfortunate incident with Tunsil being the victim with millions of dollars lost as a result. However,Tunsil is responsible for his actions and whatever the consequences come from them.

The Denver Broncos traded up to finally get a quarterback and with the 26th overall pick, they chose Paxton Lynch of Memphis.

With Peyton Manning in retirement and Brock Osweiler in Houston, the Broncos had Mark Sanchez (a.k.a. Mr. Buttfumble) and efforts to trade for Colin Kaepernick and Sam Bradford were unsuccessful,so the Broncos took Lynch.

This may be their starting quarterback at some point this season. He’s a tall guy with a very powerful arm and even has decent mobility for a quarterback of his size. I thought he could’ve gone to the Jets at the 20th pick and I said that if he slips,they might regret it and I mean that. Lynch is going to be pretty good and he went to a great situation in Denver who by the way will be raising a Super Bowl banner at the beginning next season. Talk about lucking out!

Connor Cook slipped all the way to day three and in the fourth round with the 100th pick,the Oakland Raiders select him and

probably stole him from several other teams who probably should’ve taken him that needed a quarterback.

While he had a lot of character concerns going into the draft,it was believed that by the second round he would be chosen by a team with quarterback needs. It didn’t happen and with a team like the Raiders who could more than likely use a back-up of quality who can step in should something bad happen to Derek Carr, it was a big win for them.

General manager Reggie MacKenzie came from the Green Bay Packers where they stockpiled quarterbacks and it didn’t come as much of a surprise when the Raiders decided to take him. They’ve done well in free agency and had a nice draft as well and things are looking up over there despite all the relocation rumors.

My buddies over at SportsTalk 916 have a sounds drop where co-host Greg Varozza is shouting “A FUCKING PUNTER!” when he reacted to the 49ers drafting Bradley Pinion in the 2015 draft in the fifth round out of Clemson. It makes me wonder if they’d ever say “A FUCKING KICKER” after the Tampa Buccaneers drafted Roberto Aguayo from Florida State in the second round of this year’s draft.

Yes,you read that right,the second round.

This is no knock on Aguayo’s ability as a kicker at all. In fact,I think he’ll be a very good kicker when he suits up in those horrible looking Bucs uniforms this fall,but you just don’t take a kicker or punter that high in the draft,if you even think of drafting someone in that position. I’m sure the Bucs didn’t want to miss out on him,and understandably so, but the second round is too damn high. Now you have to pay him second round money. Nice going!

I think the overall winners of this draft were the Jacksonville Jaguars. They drafted Jalen Ramsey with the fifth overall selection

and he is absolutely talented. If they didn’t do enough to blow you away,they got a steal in Myles Jack with the 36th overall pick. I had the Jags picking Jack with their first round pick. For them to be able to get both of those guys in the same draft is phenomenal. Not to mention they have something good brewing with their team already with the rising star in Blake Bortles and receivers Allan Robinson and Allen Hurns. They also have another player in Dante Fowler,Jr. coming back after missing last season.

I think the Jaguars did a lot to give themselves a better chance to compete in the AFC South,which to me is a very easy division to win. Well done,Jacksonville.

Even though the 49ers took way too many defensive backs this year,they’re not my draft losers. That title belongs to the Carolina Panthers. I understand and appreciate the effort to try and replace Josh Norman,who is now in Washington,but spending three of your first four draft picks on secondary help? Really?

They did well with drafting Vernon Butler,but spending almost all of your five picks on cornerbacks? Ridiculous! Especially when a lot of needs on the offensive line went unattended. I just don’t know what they were thinking.

As for me and my mock draft,I got nine selections correct. I was right about Jared Goff and Carson Wentz going in the top two.

Then I was surprised to know that my last minute choice to put Ezekiel Elliott in Dallas paid off as that’s where he was selected. I then got Jack Conklin correct early by virtue of the Titans trading up to the Browns. Chicago traded up to select Leonard Floyd with the ninth spot (I had him going there with the 11th pick) and Tampa Bay select Vernon Hargreaves III at the 11th spot (which is where I had him going at nine). Then at the 12th spot the Saints chose Shelden Rankins. I had to wait until the 31st pick to get another one correct when Germain Ifedi was drafted by Seattle (I had Denver keeping the pick there and selecting him,but he did go at that spot just to a different team).

So the ninth pick I got right was Myles Jack. Yes,I had him going fifth overall, but it was to the same team I had him mocked at,the Jacksonville Jaguars. You be the judge to say if I got it right at all,but I think I did. Jack did get selected by Jacksonville, I had him going there. Score one for me,I say!

That’s it for our NFL Draft edition of Odds & Ends!