Kings fans,let’s face it,this is not the kind of season we were hoping for or expecting. As you know in my season preview for the 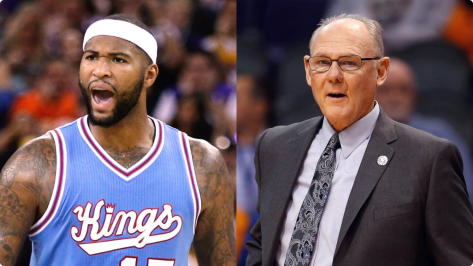 NBA I had the Kings getting into the playoffs with 45 wins. As of press time they have 30 wins with seven games to go and need to win out to get into the playoffs and get tons of help along the way. I don’t see that happening,kids.

I think after this season the team needs to go in a different direction with not only their coaching staff but also their All-Star center.

Let’s start with George Karl. I like him very much,he’s been a great coach throughout his career and there were a few times in it where I thought he got a raw deal (cough,cough,DENVER!!!), but in Sacramento he hasn’t had the same kind of impact he’s had virtually elsewhere he’s coached. Players aren’t listening to him, he’s been asked to resign a few times by the front office and not only that,he doesn’t like DeMarcus Cousins,nor did he want him on this team before the season even started. At the time I thought that was silly because these two men are professionals and needed to come together and get on the same page so this roster full on talented players for the first time in forever could have a chance at a postseason berth. That isn’t happening and it’s time this team had a coach the players will take seriously and get behind in order to make a playoff run a reality. Like I said,I like Karl very much,but it seems like retirement from coaching may be more of his cup of tea and so that his health can be better.

First off, Cousins is a remarkably talented player on a team that hasn’t had much in the way of that in recent years. However,he’s not a leader. Not on his team or in the locker room. He doesn’t have those qualities and as long as he is wearing a Kings uniform he won’t be. He’s shown that time and time again he’s been a cancer to the team even though he plays hard and does his job for the most part. He has been through five coaches in his NBA career. He couldn’t hang with Paul Westphal, Keith Smart was more of an ownership decision to get rid of more than anything as they wanted to bring in their own people to begin their ownership tenure. Then Cousins finally gets a coach that he likes in Michael Malone and is out for a time with illness and the team fades a little bit and Malone gets fired in favor of Tyrone Corbin who shouldn’t have been hired in the first place when Karl expressed interest in coaching the team the moment Malone was kicked out the door. Then the team does hire Karl and it’s been far from paradise for either of them. These two do not like one another and it’s been to the point where Cousins has cussed out Karl on the bench,causing him to be suspended for a game recently.

It seems like to me like the team would be better off without either Karl or Cousins being with the team going forward. I’d honestly be okay with the Kings moving into the new arena with a fresh start with a group of young players and a coach they will listen to and will help guide them to better days. If this happens and the Kings finish with less than 30 wins next season, I’m kinda fine with that. I’d rather see a group of guys trying to make their way in the league and learning how to win than a superstar center and a Hall-of-Fame coach who can’t stand to be with one another for another week. Luckily for both these men, their relationship isn’t lasting much longer anyhow.