Let’s begin Odds & Ends this week with the NFL free agency and the moves that were made in such a short time. No,I won’t go over all of them, but I will talk about a few.

Brock Osweiler showed us the biggest get rich quick scheme by playing only seven games last season for the Broncos and getting a $72 million contract for four years from the Houston Texans, who last year started 73 guys under center. Osweiler didn’t even bother returning the Broncos’ phone calls while negotiations between the two sides (Osweiler’s agent and the Broncos) were ongoing.

“I feel like the Houston Texans give me the best opportunity to be successful,” Osweiler said in his introductory press conference last week, “It (leaving Denver) was a very difficult decision. In fact it was the most difficult decision of my life. I’m very thankful. I’m very appreciative for everything that the Denver Broncos organization has done for me…”

I think while yes,Houston needed a quarterback and yes,the signing of Osweiler might work out,they overpaid for him. How do you give that kind of money to a guy who’s only had seven NFL starts? I just hope the Texans know what they’re doing. But then again, they did just come off of a bad playoff loss where Brian Hoyer was booed every time he trotted onto the field,so… 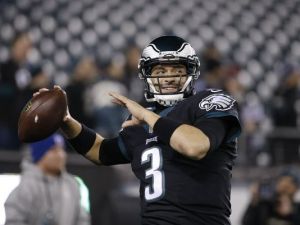 With Osweiler out of the picture, the Broncos had to think about who they might want to help lead their team back to another Super Bowl. And (so far) the winner is… Mark Sanchez!

Wait? Really? Mark Sanchez? The author of the buttfumble?

Yes,that’s the guy. He was acquired in a trade with Philadelphia in exchange for a 2017 conditional seventh-round draft pick on Friday. While his career flamed out with the Jets a couple seasons ago,he did have some flashes of greatness in his two years in Philadephia.

Colin Kaepernick is looking like one of the biggest names out there who could be moved in the coming days. Kaepernick had a dismal 2015 season in which he was benched in favor of Blaine Gabbert and later put on injured reserve. 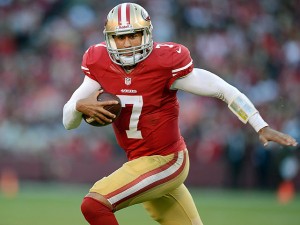 Kaepernick has expressed interest in going to the Cleveland Browns,who released troubled second-year quarterback Johnny Manziel this week,the Broncos are another team interested as well.

I can’t believe I’m saying this,but Kaepernick could be an interesting pick-up because this is a guy who is probably looking for a fresh start in his career, and if he landed in Denver he would immediately have a better change in culture, his general manager is one of the greatest NFL quarterback to ever play the game, he would have a great coaching staff which includes his head coach who once was a quarterback in the same city, he would have a great defense playing there, there are talented receivers to throw to and he can run the ball if he has to in that offense,and oh by the way,this team just won the Super Bowl in the stadium he has called home most of his NFL career. There would be a lot of upside to bringing him in,but would he be able to win the starting job? That’s another debate for another time should Denver be able to land him. 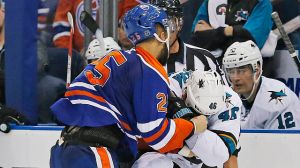 Edmonton Oilers defenseman Darnell Nurse was suspended for three games last week for punching Sharks defeseman Roman Polak as he skated back to the bench. Nurse was apparently getting payback at Polak for a hit that he delivered on Edmonton forward Matt Hendricks. Nurse was given a two-minute minor for roughing and a five-minute major penalty for fighting.
Nurse violated an NHL that prohibits fighting an unwilling combatant and was fined $13,925.

While I agree that Nurse should’ve been suspended for doing what he did, I’m not opposed to see him do what he did. For far too long the Edmonton Oilers have been classified as pussies. Not only for their piss poor record the last decade, but also because of their perceived lack of toughness. I like that there are guys on this team who aren’t going to get pushed around and don’t back down from the fight. Their problem is not being able to pick their battles in a justifiable manner. Keep in mind,Nurse is a rookie and needs to know when and where to fight. 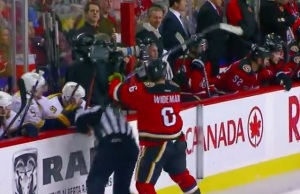 linesman Don Henderson to the ground on Jan. 27. Henderson suffered a concussion and has still not fully recovered from his injuries and will miss the rest of this season.

The suspension was reduced by an arbitrator who wrote in an 18-page opinion that “both of them testified that they can remember almost nothing about what happened during the minutes immediately after their heads hit the glass or the boards. A lack of evidence that Wideman intended to injure Henderson was also cited.

The NHL Officials Association was disappointed in the decision,stating that “the message in reducing the suspension that is sent to NHL players, as well as athletes all over the world, including children, is that the code of conduct towards officials has changed.”

I actually agree with the NHLOA on this. First of all,reducing the suspension is too little,too late when he was one game away from completing the suspension as it stood (he just gets back paid), not to mention this does teach guys that a lack of respect for officials is okay. My problem with what Wideman did was that he didn’t show any concern for Henderson when he was knocked down. Maybe he was too concussed to do so,but still,you don’t knock an official down like he did.