We definitely have to begin Odds & Ends with the return of the Los Angeles Rams and professional football coming back there for the first time in 22 years. The Rams were approved to move back from St. Louis on Tuesday with a 30-2 vote and will play temporarily in the Los Angeles Memorial Colieum beginning next season. The San Diego Chargers also have the option to join up with them in a new state-of-the-art stadium in Inglewood,Calif. near the L.A. Forum. The Chargers have a year to decide if they will move or try and get a deal done in San Diego.

The Raiders were eliminated from relocating to Los Angeles at the moment, if the Chargers decide not to move by next year,the

Raiders will be given the option to relocate with the Rams in Inglewood. They are also looking at San Antonio as another possible place to relocate.

The Rams will retain their current logo and colors in the interim,it’s my understanding that the team will probably wait until they move into their new stadium to change their uniform/colors and I’m sure they’ll bring their blue and yellow colors back.

For the Rams, it brings back a football identity to a city who hasn’t had one in a while. But my concern is if fans in that area will embrace a team that already left once. I know a lot of people who live there and I haven’t seen much excitement from them about the team. I’m sure it exists,but not from anyone I know. I hope the Rams get the support needed to fill their new stadium,otherwise the move there is all for not.

I do feel bad for St. Louis to an extent because they felt like they put up a decent effort to try and retain them,but Stan Kroenke,the Rams owner, really didn’t want the team to stay there. It was really only a matter of time before he and the team headed west. That day was Tuesday.

Something that pissed me off during Saturday’s Chiefs-Patriots game was Danny Amendola’s helmet-to-helmer hit with Jamell Fleming of Kansas City. In my view,it was absolutely unnecessary for him to do that.

Midway through the second quarter,the Patriots were to receive a punt from Dustin Colquitt and Amendola was to run it back,but instead of doing that, he leveled Fleming with his head and was flagged for the hit pushing the Patriots back half the distance to the goal.

Amendola says it was a legal hit while Fleming thinks he should be suspended. Amendola has also stated that he will appeal any fine or suspension levied against him because of his stance that it was a legal hit. It wasn’t. Sorry Danny, but even this Patriots fan thinks that what you did was a cheap shot that could’ve injured Fleming a lot more seriously. When are guys going to stop leading with their heads and hitting players to the extent where they get hurt?

I don’t think Amendola will get suspended because he isn’t Vontaze Burfict or a repeat offender like him,but one has to wonder when enough is enough when it comes to these hits. My personal theory? When a player dies from something like this. That’s when!

Hue Jackson was named the head coach of the Cleveland Browns last week in their search to find a coach who will finally make this team relevant. While I think Jackson could’ve done better,I don’t think the Browns couldn’t have. He is obviously the right guy for them and if anyone is to be tasked with trying to turn a shit franchise around, it’s him.

Jackson had already iterated that this team is going to need a quarterback,which means the Johnny Manziel experiment is likely over. I think that the ties with Manziel absolutely need to be severed. He is the new Ryan Leaf,he is the new 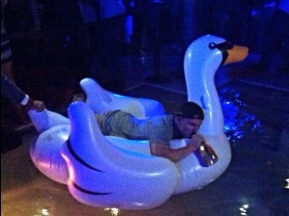 Johnny Manziel may be taking the first inflatable swan out of Cleveland,and soon!

JaMarcus Russell and is doing absolutely nothing to turn himself around and act like a professional. The Browns gave him every opportunity to get right and he hasn’t. Maybe Jerry Jones can do that,but who knows where Manziel will land next.

In any case,Jackson has his work cut out for him. This is a team who doesn’t have much in the way of talent save for Travis Benjamin and Gary Barnridge and if they’re going to get any better, they need to right coaches and personnel in there and a winning culture and attitude in that locker room. We’ll see if Jackson can deliver. I think he can because he got a raw deal when he was with Oakland and should’ve been retained despite all that happened when he was there,including the passing of Al Davis. 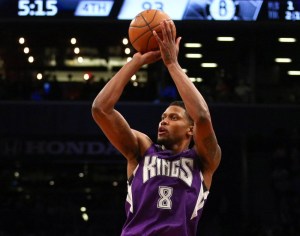 Rudy Gay is the subject of trade rumors as of late. The Kings forward has been reportedly garnered intrerest from the New Orleans Pelicans who have offered Ryan Anderson in exchange. Anderson is in the final year of his contract and him being possibly moved would be a salary dump. Other reports had Gay being traded for Alonzo Gee and Eric Gordon and there have also been rumors of Gay going to Chicago along with Darren Collison for Joakim Noah.

Gay,29,is in his third year with Sacramento and is averaging 18 points per game and nearly seven rebounds per game and is second on the team in scoring.

I’ll be honest, I don’t want to see a talented guy like Gay go,but he is probably the most moveable guy if you’re going to make a move. I think a guy like Anderson would be a great spark plug for the team,but beyond that,you’d be bringing him home as he’s a native of El Dorado Hills and what player wouldn’t want that?

Will the move happen? We have a few weeks to find out!