Reviewing Dumb and Dumber To

Twenty years ago,the hilarious movie Dumb and Dumber hit theaters starring Jim Carrey and Jeff Daniels. Back then, 12-year-old me went to see it and I found it hilarious, so much so that some of the lines from that movie are ones I still remember and even use myself today. 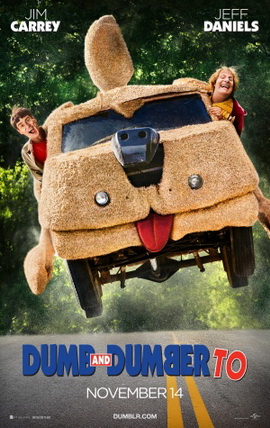 This past Friday the sequel to that movie was released, Dumb and Dumber To. Saturday I went to go see the movie just to see if it would hold up to the first one. You’ll see what I think about it after I give you the summary of the movie.

The movie starts with Harry Dunne (Daniels) visiting Lloyd (Carrey) at a mental home where he has been for 20 years following his doomed romance with Mary Swanson (a.k.a. Mary Samsonite). Harry visits Lloyd regularly and has news about a medical condition he is going through. As Harry walks away, Lloyd starts to say something. Harry tries to get him to say more, only to have Lloyd shout “Got Ya!”, claiming to have spent all of this time in the mental home for a gag, to which Harry thinks is awesome.

Once they get back to their old apartment, we see that Billy from Apartment 4C, the kid who was sold a dead bird by Harry and Lloyd is an exotic bird collector. We also see that Harry has a new roommate named Ice Pick, a creator of crystal meth which Harry thinks is just really hard candy. He also has a cat named Butthole.

Harry informs Lloyd that he is in need of a new kidney and is in dire need of a donor soon. So the guys ride their bike to see Harry’s parents,who he hasn’t seen in over two decades and live down the street. We then learn that Harry is adopted and that his parents are Chinese. Harry is stunned by the news. On the way out of Harry’s parents house he collects the mail he has received over the years and a postcard from Fraida Felcher (Kathleen Turner), his old girlfriend from high school, informing him that she is pregnant. The postcard is from 1991.

So they go to track her down so that Harry can meet his offspring. It turns out she works at a funeral parlor and is a lot older and less attractive since they last saw her. She tells the guys that she put the baby girl she had up for adoption and tried contacting her a couple of years ago,but she declined to speak with her. Harry and Lloyd decide to track her down.

Their journey to find her ends in Maryland where her adoptive father  and his second wife lives. Harry’s daughter’s name is Penny. She’s gorgeous but is not very bright. Her father is Dr. Bernard Pinchelow, a world-renowned scientist. Penny is going off to a convention in El Paso,Texas since her father is ill. He has a package to give to her for another doctor,which she promptly forgets along with her phone.

After she leaves, Harry and Lloyd arrive and explain the situation to the Pinchelows and Bernard lets the boys call Penny. It is then realized that she forgot the package. So it’s decided that the guys along with Travis (Rob Riggle),the family housekeeper and lover of Adele,Bernard’s wife, will accompany them on the trip.

Travis is annoyed by their idiocy and pranks, one of which includes farting in the back of the hearse they are traveling in and closing the back window,trapping the smell with Travis. Travis gets back at them while at a gas station where he invents a game called Funnel Nuts,where they stick funnels in their pants and drop peanuts from their noses. Travis pours slushies down their pants and gets back at them for the trapped hearse farts.

Harry and Lloyd get even by setting off fireworks in his motel room, getting burned so badly he jumps in the pool. Travis then calls Adele begging her to let him kill the duo. The guys hit the road again and Travis sets a firecracker off where it deafens the guys. The hearse stops in the middle of the road and Travis takes the opportunity to try and kill the guys, but his efforts are thwarted when it is known to the audience that the hearse is on train tracks, a freight train comes by and takes the hearse and Travis with it. Travis was killed.

After getting hearing aids for Harry, the guys find their old Mutt Cutts van and decide to take it for a spin,only to crash it a short time later. They then steal a Zamboni and head to El Paso. Adele hears from Travis’ twin brother, a special-ops expert who knows how to kill people, about Travis’ death. Adele asks him to finish the job and he agrees.

After arriving in El Paso,Lloyd finds someone who knows Penny and gives him a phone to call her on. Someone overhears that Penny is at the convention with her father,mistaking Harry for Bernard and invites both he and Lloyd inside.

Harry soon realizes that Lloyd is attracted to Penny and says to him that she can do better. Lloyd’s feelings are hurt and he leaves. While Harry judges a young inventor’s competition, Lloyd gets a call from Penny and they both meet up. It is at a restaurant where Penny reads the letter from Fraida and it describes where she was conceived,which turns out to be a place where Lloyd took many women when he was younger,including Fraida. This leads Lloyd to believe he is Penny’s father and therefore Harry cannot receive a kidney from Penny.

Adele arrives at the convention where she exposes Harry as a fraud and reveals that he is not Bernard Pinchelow. Fraida arrives at the convention and she sees Penny. Neither of them can get in without proper credentials. Penny is very sad that she can’t see her real father,so Fraida pulls the fire alarm. Harry bumps into Fraida and Penny, only to have Travis’ twin brother pull out a gun. They then go into a bathroom where Lloyd finds them and is carrying a cooler with his kidney inside. Lloys had gone across the border to Mexico to have it removed so that Harry could have it. Fraida reveals that neither Lloyd or Harry are Penny’s birth father. Also,the real Dr. Pinchelow appears and is healthy, knowing about the whole thing. It turns out the package he had given to Penny was filled with cupcakes.

Harry is shot and is rushed to the hospital,where it is revealed that he was goofing on Lloyd the whole time. It’s also revealed that the kidney Lloyd donated was replaced with a pork chop. Penny is told that her father was Pete Stainer, an old friend of Harry and Lloyd who was killed in a motorcycle accident. Harry and Lloyd then return home.

Overall,I thought the movie had its share of funny moments, but this sequel in my view was about a decade too late. It was a bit sad to see these guys play 50-year-old versions of themselves. I thought Rob Riggle was hilarious in this movie,he is underrated as an actor. If you want to blow $12 to see this,go for it,otherwise,wait for it to be placed on DVD and Blu-Ray. 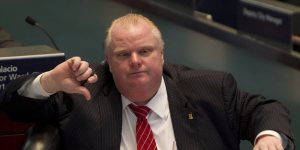