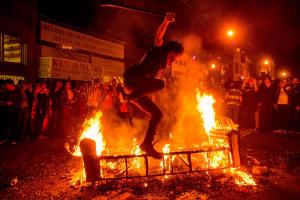 We’ve got a special World Series edition of Odds & Ends today for you guys!

It seems like a new tradition has started after the Giants win the World Series and it’s truly a disgusting one: Setting the city on fire in celebration.

Following the Giants’ third World Series championship in five years win on Wednesday, Giants fans “celebrated” by setting fires to couches,mattresses,and trash cans. Also vandalized were police cars and MUNI buses. Forty arrests were made that night,29 of them for public intoxication. One person was hospitalized for being stabbed several times. One other person was shot.

I’m all for celebrating championships,but this is not the right way to do this. I was hoping that fans would’ve learned from 2012 and not to do this again,but the opportunity to celebrate responsibly was missed that night and the end result makes the Giants fan base look bad. Very bad.

I want my readers to know that the actions of these few people do not represent the entire fan base. I think my friend Brandi said it best the other day on her Facebook page:

“Anytime the Giants win anything I want to celebrate, especially the World Series. I may shout, jump, or cheer but I have never had the urge to light things on fire in the street, jump on cars, stab people, or shoot someone. Seriously, grow up because you’re ruining it for the rest of us.”

Now on to the parade,also known as the proper way to celebrate your latest World Series victory. 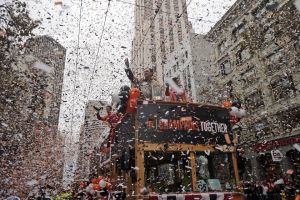 The parade drew close to a million people who weathered the wet weather on Friday along Market Street to cheer on the Giants as they waved right back on double decker buses. Many people skipped work and school too witness the celebration.

“I’m going to send them to school on Monday saying they had ‘orange fever,’” said Marcela Habash, 36, of San Francisco, who brought three of her four children to the plaza outside City Hall to see the celebration.

From Market Street,the end of the route was at City Hall,where the players,managers,and broadcasters were introduced to the crowd. Some of the players said some words,as well as local leaders like San Francisco mayor Ed Lee.

One thing I noticed, as well as several others, was that Tim Lincecum did not wear any Giants attire when the team was introduced at City Hall. It may be a signal that his days wearing the orange and black may be done.

Giants CEO Larry Baer proudly proclaimed that the Giants will break the even year trend and repeat next year in 2015. Hopefully he can put his money where he words are. 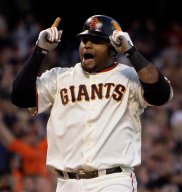 Now that the season is over, a lot of talk is surrounding whether or not the Giants should or will re-sign third baseman Pablo Sandoval. Sandoval has a great year defensively,but struggled early to get his bat going. He was clutch in the postseason,getting 26 hits,the most ever in history.

Sandoval is possibly the top free agent out there in a slim field of them. At 28, the timing for him to get a great contract couldn’t be better. He has made it no secret that he would like to stay in San Francisco. According to his agent,Gustavo Vazquez, he loves the city and the fans.

The Giants in recent years have done a great job at keeping their players (Billy Beane,take note!) and it would surprise me if Sandoval left. I think he and the team will come to terms to a deal that works for everybody and keeps No. 48 manning the hot corner for years to come.

I think one of the pure funniest moments came when Madison Bumgarner was announced as the World Series MVP. When Bumgarner was being presented with the prize for winning the award, a 2015 Chevrolet Colorado,a vehicle that by the way was recalled earlier in October, Rikk Wilde,the regional zone manager for Chevrolet, seemed absolutely nervous and at a loss for words when describing the vehicle on live television. 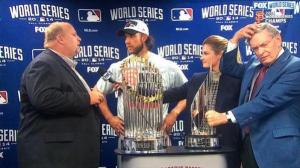 Wilde became known and the Chevy Guy and was a trending topic on social media. Instead of running from the incident in embarrassment, Chevrolet laughed with us by editing the end of their commercial for the new Colorado by saying “the all-new Chevy Colorado, you know you want a truck … and stuff.”

I thought the incident was funny myself and felt for Wilde. I’m sure if I was in the position of presenting a guy like Bumgarner a new truck,I’d be nervous as hell,too. Well,either that or say something campy like “The Colorado,it’s got the latest technology,it’s got cup holders,a stereo,and seats.”

Next time,I think Chevy should get this guy to present the award.