It continues to get worse for the Edmonton Oilers. Despite it being a young season, they have yet to win a game or give their fans any sign that things are going to get any better. At 0-4-1, the team has only scored one point in the standings in the 2014-15 season. The latest loss was a 2-0 shutout at home against the Vancouver Canucks on Friday.

And to be honest, we’ve had enough. 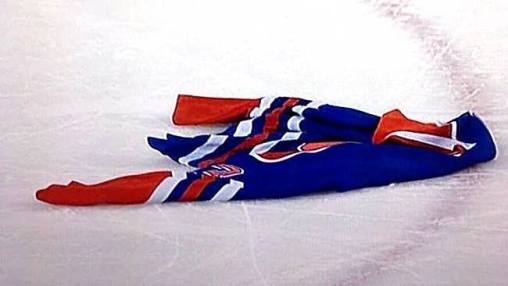 I’m sure some of you are saying to chill,calm down, it’s only been five games. But that’s not why we’re pissed,frustrated,and even embarrassed. It’s not that it’s the start of a young season with lots of time left to go, it’s that we’re beginning year nine of a team that,for some reason,is still rebuilding and aren’t doing anything different to help their cause to get better. This has caused fans to be nothing but upset with the Oilers front office, their emotionless coach Dallas Eakins, embarrassed to be fans of this team, to the point where several fans have hurled their jerseys onto the ice as a sign of frustration and disgust with the team’s lack of success on the ice since their 2006 Stanley Cup Finals appearance.

To me,it starts with the ownership and front office. They have shown time and time again in the last nine seasons that the only thing they’re good at is getting lottery picks and making money at the gate at the expense of the die hard fans who show up despite the team’s overall shittiness since 2006. What they aren’t good at is getting high profile free agents to come and play there or convincing the loyals that things are going to get better. They’ve promised it on many occasions and have yet to make good on any of those promises.

It’s not just the management,it’s also the coaching. Dallas Eakins is in his second year as the Oilers’ head coach and is proving to me and all other Oilers fans everywhere that he is not an NHL head coach. When I heard about his time as coach of the AHL’s Toronto Marlies and how he was beloved by players and that they swore by him, I was willing to give him a shot. But 87 games in, I’m not impressed. His continuous lack of emotion or passion on the bench and odd coaching decisions, not to mention his underuse of Nail Yakupov gives me the feeling that his players aren’t buying into his philosophies as a coach,or Eakins doesn’t know what the fuck he’s doing on an NHL level. Something tells me it’s both.

I hate to blame the players because they’re doing the best they can under some of the worst circumstances in the NHL, but they’re looking lost out there on the ice. The goaltending has been subpar, they need help in the center position, and their defense hasn’t been stable in I don’t know how long. My first sign that this season was going to be as shitty as all of the other seasons since 2006 was a meme I saw on Facebook in the preseason that read “Oilers are already in midseason form” and it depicted four Oilers looking to get the puck from the Canucks from the net while a Canuck is wide open for a shot. It made me shake my head and say to myself “Here we fucking go again”.

I don’t expect this team to go to the postseason anytime soon by any means, and by now about 98-percent of the fanbase is in that same boat as me, but what we are expecting,and even to a point deserving, is for this team to be better and for the futility,in some form,to end. For a front office and management team that knows what they’re doing, for a veteran coach to come in there and show these guys the right way to play hockey and the path for better days ahead. Right now, the days ahead are looking worse and worse, loss after loss.