I know I am not the only one who doesn’t think Johnny Manziel has a lot of growing up, but apparently there is one person who disagrees,it’s Johnny Manziel.

The Texas A&M sophomore quarterback and reigning Heisman Trophy winner has been channeling his inner Amanda Bynes this offseason. From badmouthing his own school to attending parties at rival colleges to getting kicked out of those parties, Manziel has been acting like someone who’s celebrity has gone to their heads and is unapologetic for it.

Now an NCAA investigation is looming where Manziel allegedly accepted money for autographs (up to five figures). If the allegations hold true, he could be ruled academically ineligible.

If you ask me,this kid has Ryan Leaf written all over him. He has a lot of talent and was superb last season (as a freshman, no less), but his attitude and sudden fame may be costing him millions in the NFL in the near future. If I was a GM who may be needing a new quaterback of the future anytime soon, I would steer away from this kid if he is going to act this way off the field. I have a strong feeling that his production on the field may be affected by what he has done off the field. And keep in mind,Texas A&M is in the SEC now and they do not mess around in that conference.

I think I am one of the few Giants fans who didn’t feel any sense of betrayal or heartbreak when former closer Brian Wilson,an unrestricted

free agent, chose to sign a minor league deal with the Los Angeles Dodgers last week. Giants fans everywhere who once adored him called him a traitor and said he betrayed them and that they would never root for him ever again.

I understand why fans are upset, he signed with a rival team that they deeply hate. In addition, a guy who once brought intensity to a team that now lacks it in a big way is now gone. I see it in a different way.

I see it as a guy who has sought for an opportunity to revive his career, 28 other teams decided against it and one team decided to give him a chance. Yes,it sucks that it was the Dodgers, but what was he going to do? Say “No, I am going to wait around until the Giants sign me again”? That isn’t how life or free agency works. Think about it, if you work for a company and they let you go and a rival company wants to give you another shot, chances are you aren’t going to turn that down.

While it is easy for Giants fans to feel betrayed by a guy who wanted a second chance in baseball, the smarter part of me realizes that sports are a business and if the Giants had offered him a contract to come back,he would have jumped at the chance. And Giants fans,you know he would have.

I think it is time that fans stopped worrying about who is no longer on the team and started focusing on ways the current squad can finish strong and build on something for next year. 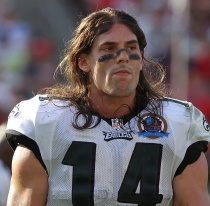 I probably should mention Eagles wide receiver Riley Cooper and his comments at a Kenny Chesney concert earlier this summer.

I do,however, think he is being vilified more than he needs to be. I think the Eagles fining him was enough punishment. Sending him to counseling over this is a bit extreme. I don’t know if he needs it, but it seems like he has been punished enough with the scrutiny he has received. What Cooper needs to truly do is be out there with his teammates trying to make up for what he did and what he said and win their trust back. I hope the Eagles let him have the chance to do that. I would hate to see this young man lose his job over one mistake.

The Pro Football Hall of Fame inducted seven new members over the weekend, among the headliners were Warren Sapp, Cris Carter,and Bill Parcells. I,for one, enjoy seeing the inductees going in and hearing their speeches. All the speeches were great, but it was Carter who had the most passionate speech and one of the best speeches I have ever heard from this ceremony.

Carter talked about his family and how his brother,Butch was a father figure to him. He apologized to Ohio State fans for signing with an agent and not getting a chance to be a senior for the Buckeyes. He thanked Buddy Ryan, his coach in Philadelphia,for cutting him after he had drug problems because it was a wake-up call for him to turn his life around,which he did once he got to the Vikings. He also talked about his former Eagles teammate Reggie White and how he was the first man to tell him he loved him.

Carter took everyone who helped him along the way on the road to Canton with him to the Hall of Fame and it showed through his words on Saturday night. Congratulations on a great career,Cris,and congratulations on getting into Canton, it is well deserved!