We begin Odds & Ends this week with the stunning season opener in Foxboro where the New England Patriots started their campaign to defend their Super Bowl title against the Kansas City Chiefs. 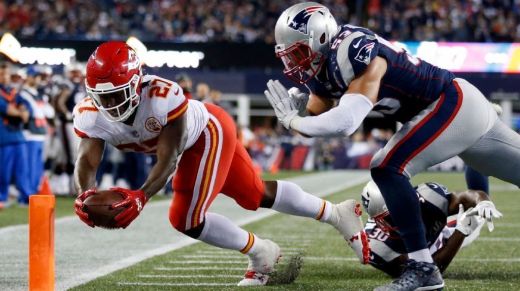 What was thought to be a game that many thought the Patriots would win easily was actually far from it. The Chiefs had their way with them and it wasn’t even funny.

Sure,the Patriots were in the game for a while and tailback Mike Gillislee had three touchdowns for New England,but it was Kansas City’s offense and the inability of the Patriots’ defense to stop it,despite the fact that the Chiefs had a night where they had a lot of penalties. Rookie Kareem Hunt overcame his jitters from fumbling his first ever carry to gain 148 yards and scored a rushing touchdown and a receiving touchdown.

Hunt’s 246 scrimmage yards were the most of any rookie making his NFL debut since the 1970 merger. Tyreek Hill had seven catches for 133 yards and a score.

Tom Brady did not have a touchdown pass in this game and only completed 16 of the 36 passes he threw for 267 yards. His performance,however,wasn’t an issue to me. He was making throws,and very good ones,but his receivers either couldn’t make the catches or weren’t paying attention.

Defensively,the Patriots looked very raw and very out of rhythm and were not what you could describe as hungry or having a sense of urgency. Need proof? How about the 553 yards they let the Chiefs rack up on them? Sure,there are a lot of new faces on this team that haven’t played with one another for very long and yes,Dont’ A Hightower, possibly their best player, was injured and didn’t return,but that doesn’t excuse the fact that they allowed more yards in any game Bill Belichick has ever coached. Those guys were not ready last night for this Kansas City team who shredded them over and over and over again,and at home on a night that was supposed to be a celebratory one that instead ended in heartbreak,confusion,and panic.

Do I think they’ll regroup and be better than they were on Thursday in New Orleans? Absolutely? At the same time,though,I’m cautiously optimistic. This defense needs to get better fast. More on that later in this column.

While I’m bummed that my team lost on Thursday, I have to give major kudos to Chiefs quarterback Alex Smith. The veteran quarterback,who is trying to hold on to his job as the starter in Kansas City beyond this season, had perhaps his best performance in a regular season game. Smith,33, was 28-35 for 368 yards and four touchdowns. He and his offense outplayed the Patriots. They looked more like the Patriots than the Patriots did offensively. Smith was able to find wide open guys and they were fast enough to take the ball to the house again and again.

This is the second regular season match-up against New England where Smith has gone off. In 2014, his Chiefs routed the Patriots 41-14, a game where Tom Brady was benched in favor of Jimmy Garoppolo. Smith has long been heralded as a game manager, a guy who does just enough to manage the offense well enough for the team to win.

Let’s make one thing clear, Smith is no game manager. Is he going to throw for 5,000 yards and 40 touchdowns in a season? Not at all,but he is going to get decent stats and he’s going to do his best to help his team win. He’s done that every year he’s been in Kansas City,and while everyone’s excited to see Pat Mahomes at some point,this is still Smith’s team and he’s not quite done yet.

Back to that atrociousness that is the Patriots’ defense, I’m going to make a bold

prediction right here,right now: Rob Ninkovich will end his retirement and come back to the team.

Ninkovich retired last month after an 11-year career,but it’s been reported that he is keeping in shape and may be willing to return if necessary.

“I am working out to stay in shape,” he said Thursday before the game on CSN New England, “… I’ve always worked out hard, so you can’t go work out and — what am I going to do? Go jump on a bicycle and that’s it? It’s in me to have a good workout. That is just what you do as a football player. I am enjoying the freedom of doing whatever I want right now.”

Honestly,I think he should come back. If he’s keeping himself in shape and he’s working out even after his career is over,then yes,bring this guy back. Look,Ninkovich was a great,versatile player for this team and with so much missing with this defense and seeing how they looked last night, a strong veteran presence like him should be brought back and I think he will. He was too valuable to this operation before he retired and he’s even more valuable now.

Jason Whitlock of Fox Sports 1 is under fire after a Colin Kaepernick sketch mocking the former 49ers quarterback’s activism in pro-black causes.

Whitlock,who is one half of the show Speak for Yourself along with Colin Cowherd, tweeted a photo of himself with a man portrayting Kaepernick wearing a fake afro wig and a black glove on his hand (that man is Christopher Reid of Kid ‘N Play). The sketch received plenty of backlash from people who saw the photo on social media and was then cancelled. According to producers, the sketch was never greenlit and never completed and even one of Whitlock’s Fox Sports 1 colleagues,Shannon Sharpe,was upset over the sketch’s creation.

First off, who the hell even watches Fox Sports 1? Aside from playoff baseball, I don’t know anyone who watches that channel. So even if this sketch even aired,at most,76 people would’ve seen it initially.

Second of all, if this is tied to Jason Whitlock,it’s more than likely going to be awful. This is a guy who couldn’t even keep himself on ESPN (twice) and has said a lot of controversial things in the past that I haven’t agreed with. He also seems to be overly critical of people like Kaepernick who are likely to promote black causes. I have no thoughts that the sketch would’ve been even remotely funny and honestly,I’m glad that Fox Sports 1 killed it before any more backlash to it came to the network and Whitlock.

Sumlin’s daughter,Shelby,a current student at Texas A&M,commented on the photo on Twitter, “Imagine being a kid & reading this bs abt your dad. Things ‘fans’ say gets taken personal by more than just the coach. Humanity isn’t hard,” Shelby tweeted.

I understand the frustration of your favorite team losing a game the way the Aggies did, but to brutally criticize the man in that way,to the point where the man’s family feels threatened, is in no way,shape,or form acceptable. It feels to me like,in 2017, that with groups such as Neo-Nazis and the Ku Klux Klan making a comeback that racism has become acceptable to some and that acts such as sending that hurtful letter to Sumlin seem okay to these people. My greatest fear is that more of this is coming and it may get worse,let’s hope it doesn’t.

Back to the NFL and the Seattle Seahawks unveiling a new alternate logo before the season began,and it’s creepy.

If anyone ever wondered what the Seahawks’ logo looked like from the front view,which by my account is virtually nobody,here it is:

Twitter didn’t take long to roast the Seahawks for their new alternate logo.

I… I just don’t know what to think about this new #Seahawks logo. pic.twitter.com/2jVVsPaIUk

I’m fine with the team having a secondary logo,a lot of teams have them,but this one misses the mark for me. I think it’s creepy and could unintentionally scare a lot of little children. However,if you’re into creepy shit like this logo and love the Seahawks,you’re in luck,they’re selling apparel with this logo at their team store. Hurry while supplies last!

Finally this week, if you’re a college football program and you’re planning to wear a white jersey with white numerals on it, do yourself a favor,don’t do it. 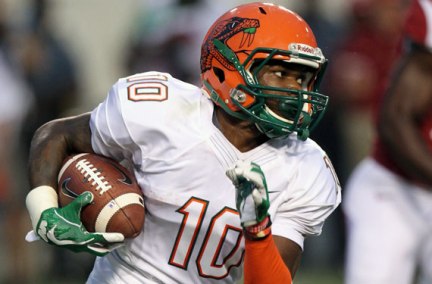 Florida A&M University did just that when playing the Arkansas Razorbacks on the road.

The team has had the white jersey with the white numerals since last year,but were not penalized for them,until now. An NCAA rule on the books since 2015 states that a team’s numerals cannot be the same base color as the jersey,whether outlined or not. FAMU didn’t have a back-up jersey to wear,so as a result,the Rattlers lost a timeout before every quarter as a result of their fashion faux pas.

I know this is kind of a fad thing to do for a few pro sports teams (namely the Miami Heat,who by the way need to stop that shit) and it’s an awful look for everyone who isn’t the Anaheim Angels, but if you’re a college team wanting to do this,just remember what the consequences are and how many timeouts you’ll actually have as a result.

That’s all for Odds & Ends,until next time!