We begin Odds & ends this week with the San Francisco Giants continuing their search for a closer.

Fans are ever eager to see who the team will get to unseat fan un-favorite Santiago Casilla as the new closer. The season has been over for a month

now and movement for the team to sign a much-needed closing pitcher is going very slow.

“…We still are in process, relative to trade options, relative to free agent options, to be clear who’s pitching the ninth inning for us. So we feel we have the makings of a good bullpen, we just need to be clear who’s pitching the ninth. And we’d like to solidify that through the trade market or free agent market. It’s progressing. We’re a month into this process, so we have a lot more information. But ultimately, until we have a closer, we’re still in the search mode.”

Names like Mark Melancon and Greg Holland have been linked to San Francisco, but nothing has materialized. Kenley Jansen and Aroldis Chapman are also available,but neither pitcher is expected to sign there.

I hate that this process is taking so long. I understand this team wants to make damn sure they’re making the right decision on who they want to close out close games, but the fact of the matter is is that this team hasn’t had an adequate closer for a few years now. A lot of Giants fans were not on board with Casilla as their closer, they didn’t understand why Bruce Bochy went back to him time after time when it was proven that he wasn’t right for the role. This team blew it at the trade deadline when they didn’t get a closer and the only reliever they did get was Will Smith who was less than impressive and was never even tried out as a closer.

I hope something brews at the Winter Meetings this week and that this team gets the shut-down closer they’ve needed for so long. They have lots and lots of money to do it (why else would they charge $12 for a beer?) and need to do it if they want to be in the mix for the playoffs in 2017.

The Kings will have to wait to come back to Philadelphia to play the 76ers as a result of the game being postponed due to condensation on the court at the Wells Fargo Center.

The reason? Their hockey co-tenants,the Flyers,hosted a game the night before and the ice surface,which is located underneath the hardwood playing surface, was affected by an unseasonably humid November day in the city.

The Kings announced the postponement on Twitter and poked fun at the 76ers, saying “y’all can trust the process but not the floor? Smh (shake my head), (at) Sixers.”

Fans booed when the postponement was announced. Philadelphia 76ers CEO Scott O’Neil said tickets to Wednesday’s contest would be valid for the makeup game, and fans in attendance also would get an additional ticket to another game — either Dec. 5 vs. Denver, Dec. 14 vs. Toronto or Dec. 18 vs. Brooklyn — plus a rebate on parking.

Postponements of games in the league are nothing new in the NBA. Six of the last seven seasons have seen at least one postponement, the league called off two games last season due to extreme winter weather.

I hate that this happened for both teams, but it was the right thing to do to keep the players on the court as well as other personnel safe. Hopefully they announce a make-up date soon.

As many of you know,Charles Barkley has far been a fan of the Golden State Warriors and their style of play that has netted them their recent

successes. He had an explanation why on Thursday on TNT.

“Maybe I’m old school, but I’m never going to like that little girly basketball where you have to outscore people,” Barkley said. “I’m biased against girl’s basketball. I love (UConn women’s coach) Geno Auriemma. I love women’s college basketball. I don’t want it in the NBA.”

Many people took offense to Barkley calling the team’s style of play “girly” and ESPN’s Rachel Nichols called him out on it after the comments were made.

I think Barkley should’ve said “weak” or “lame” or even “overrated” instead of “girly”, but I understand how he feels about how the Warriors play.

They do play a certain brand of basketball that isn’t as physical as it was when Barkley played. It seems like all they do is shoot three-point shots and try to score 173 points on you every game. Nowadays it seems like players are less and less physical on the court and don’t play very much defense and live and die by the three-point shot and for me,like Barkley, it’s a style of basketball that doesn’t excite me. 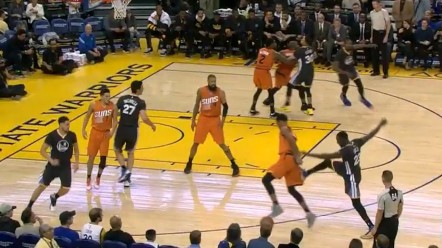 Continuing with the Warriors and I should amend that the Warriors aren’t physical enough because they do have one player who is probably too physical,you could even say he’s dirty.

That player is Draymond Green.

Not only did Green kick Steven Adams of the Thunder in the groin repeatedly during the Western Conference Finals, he’s continued the trend of kicking other players this season.

Green has defended his style of play by saying it’s an homage to the Detroit Pistons’ “Bad Boys” era, a tim when the Pistons had dirty players of their own such as Bill Laimbeer, Isian Thomas, John Salley, Rick Mahorn,and Dennis Rodman.

No fines or suspensions have come from any of these recent incidents. The only punishment he has received for his dirty play is a too-little,too-late suspension during the NBA Finals that took place when he drew a flagrant foul against LeBron James.

I’m disappointed in the league’s lack of action when it comes to Green. He’s not only a dirty player, he’s also intentionally injuring players now with the incident with Chriss. I think he’s getting special treatment because he’s a member of the Golden State Warriors and since they’re the golden boys of the league who can do no wrong and shoot a lot of threes, his dirty play is going unpunished,and that may be acceptable to Adam Silver and the rest of the league’s front office,but it isn’t to fans of other teams who may lose players due to injuries caused by Green’s questionable play on the court.

The Miami Dolphins have revoked the season tickets of a group of fans involved in an altercation in the upper deck of Hard Rock Stadium during the team’s win over the 49ers.

The video,shown above, shows a group of Dolphins fans punching and shoving fans wearing 49ers attire. The Dolphins said they immediately investigated and identified the season ticket holders who were involved. The team said “this type of behavior and conduct is not acceptable.”

I’m sure that alcohol was a factor and honestly, that shouldn’t be an excuse for what happened. Whether you’re sick or well,you’re responsible for your actions and those Dolphins fans now have the consequences of losing their tickets because of how badly they treated fans of another team. An outing such as a football game should be enjoyable as possible for everyone and there are 32 different NFL fanbases,you can’t fight the all.

The College Football Playoff teams were selected on Sunday and I think this time they got it right.

Alabama, Clemson, Ohio State,and Washington will vie for the National Championship. Teams such as Penn State and Michigan will be on the outside looking in. They finished fifth and sixth,respectively.

The Huskies will be playing Alabama in the Peach Bowl while the Buckeyes will face the Tigers in the Fiesta Bowl. Both games are on Dec. 31.

The Buckeyes are the first team to reach the playoff in its three-year history without winning their conference while the unbeaten Crimson Tide are in the playoff for the third straight season themselves.

Some people don’t think Washington does not belong there because other teams finished strong like Penn State, but I disagree. Washington has played far better than anyone expected them to do this year,and they did it in an unchallenging conference. Yes,I’m a Pac-12 apologist to an extent,but when it’s always teams from the Big 10 or SEC vying for a national championship,it’s nice to see someone from a different conference to get in there. I don’t see the Huskies beating the Crimson Tide,but it’ll be interesting to see if they can perhaps pull off the impossible.

My prediction for the National Championship match-up is Ohio State and Alabama,with Alabama winning yet another title.

This will do it for Odds & Ends this week. The next edition will be on Dec. 19th!