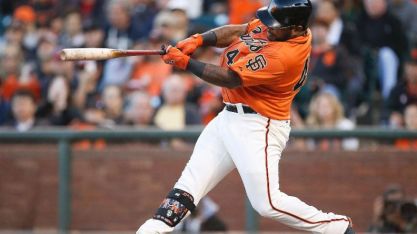 We begin Odds & Ends this week with the rumor that Red Sox third baseman Pablo Sandoval may return to the San Francisco Giants.this according to the Boston Herald report citing a “baseball source.”

It has not worked out well for Sandoval,30,who just finished his second year of a five-year $95 million deal he signed with Boston after the 2014 season,a season that saw him record the final out as the Giants won their third World Series in five seasons. Due to surgery on his left shoulder, Sandoval only played in three games in 2016 and failing to notch a hit in seven at-bats. In 2015,he hit .245 and 10 home runs. Sandoval’s time in Boston hasn’t fared well with reports of him being highly overweight and not committed to this job,as evidenced by liking pictures on Instagram of highly attractive women.

The Giants,however,are denying any rumblings about bringing the two-time All-Star back to the bay.

“I am not aware of any consideration of a reunion,” general manager Bobby Evans said, “but we’ll never forget all that he meant to the Giants organization.”

Bringing back Sandoval at any cost or for any reason period is far from what ails this team. They need to bolster their bullpen and they need to do it fast. I don’t know who at the Herald decided to tell this kind of story,but it seems to me that fans in Boston don’t want anything to do with him and are trying to get any story they can so that Sandoval will go away. While that’s understandable,the Giants and their fans have moved on,but will never forget what this guy meant to them in the time he was there.

The San Diego Padres have,you guessed it,unveiled yet another set of new uniforms for the 2017 season. And they’re fucking boring as fuck.

Gone are their blue and yellow home unis,which I had a feeling was a one time deal given that they only had them to honor the All-Star Game which was held in their home park last season, and in place are a boring blue and white set with Padres across the front. The road uniforms have the old bowtie San Diego Wordmark that the team wore on their uniforms from 2004-11.

You’re probably wondering if the team will still have their brown and yellow alternate uniforms to wear,and the answer is Yes. Unfortunately what the team isn’t doing is wearing those uniforms full time like they should be.

I don’t understand why the Padres don’t take a unique color combination like brown and yellow and bring it back to wear full time. Do you know how many teams wear blue as their primary color? Or red? Very few are wearing colors like green or purple or other colors. I think Major League Baseball teams need to go to some different color options than blue or red,the Padres could make that start if they absolutely want to,they have the fans’ support on that.

Continuing with uniform talk, did anyone see the Miami Dolphins uniforms that they wore on Sunday? Yeah,that should still be their uniform.
The Dolphins’ throwback uniforms were worn on Sunday and the beat the 49ers in style. These uniforms were worn from the team’s inception in 1966 until the mid-1980s when they added the team’s logo to the sleeve and minimized the stripes on the sleeves. The team overhauled their logo in 2013 and adopted a swimming dolphin logo that honestly looks like the tramp stamp on a girl who got it when she was a 17-year old senior who did it because she has “daddy issues.”

The Dolphins’ current uniforms aren’t much better with teal being way over-utilized and there’s barely any orange in it at all. Well,unless you count the all-orange Color Rush uniforms which should never be worn again.

A new critic has come out with their view on Thursday Night Football; none other than John Madden. 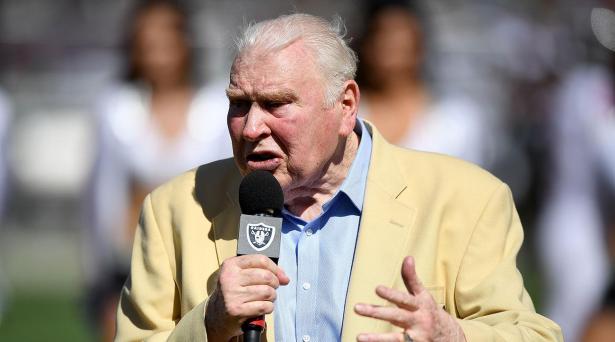 The retired color analyst told the Bay Area News Group in a podcast that he’s not the biggest fan of the mid-week games and had this to say:

“What happens is there are not a lot of good teams, and they have too many windows to put these games in. When you think of an early Sunday window, a late Sunday window, a Sunday night window, a Monday night window, a Thursday night window. They all want good games, and there’s not enough good teams,” Madden said. “Just look at the list of teams playing. It takes two. It’s not just one good team. You have to have two to have a great game, and there’s not a lot of great games. And we’re spreading it out more and more with fewer good teams, which makes it doggone impossible to have good games. If the games aren’t good, that’s part of it. Now there are other things: the Millennials, iPhone, and the stuff people do as they live differently.”

Madden is absolutely right. Aside from Thanksgiving Day games, there’s not much appeal to watch a game on Thursday. No specially colored uniform is going to improve ratings and it doesn’t matter what teams are playing on those specific games,the appeal just isn’t there. If it’s insisted that these games on Thursday are to continue,then these teams need an extra week to recover. I mean, almost every team that goes over to play in those equally stupid London games goes on a bye afterwards, so why not this?

I think that’ll do it for Odds & Ends this week,we’ll see you next time!