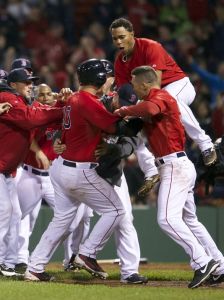 If there’s any rivalry that I am enjoying right now,it has to be the one between the Tampa Bay Rays and the Boston Red Sox. These two teams absolutely do not like each other and I love that!

Last weekend in St. Petersburg these two teams got into it when Yunel Escobar took an extra base late in the game when the Rays had it in the bag. Leading to words being exchanged between the Red Sox dugout and Escobar and the benches of the two teams clearing, resulting in ejections for Escobar, Jonny Gomes,and Sean Rodriguez of the Rays.

Fast forward to Friday when the teams met up in Boston and David Price throws a pitch that hits David Ortiz in the hip. Warnings to both benches were issued. John Farrell was irked that Price did not get ejected for doing that and was ejected himself.

A bench-clearing scrum occurred in the fourth when Price threw at Mike Carp,hitting him. The lone ejection was to Red Sox bench coach Torey Lovullo,who threw his hat down after learning Price wasn’t ejected. Two more Red Sox managers would be ejected during the course of the game.

Clearly these are two teams that have little love for one another. In years past things have gotten a bit more ugly than they have lately and something tells me they might get even uglier when these two teams meet up again in July. Stay tuned!

No,it isn’t a rerun from last year, the Heat and Spurs will be in the NBA Finals again. And It kinda bores me to be honest with you. 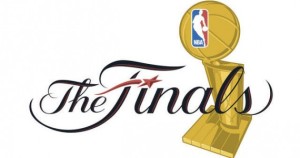 It’s not that I don’t think these teams are any good, it’s that I saw this series last year and it wasn’t that fun of a series for me. The only entertaining thing was the bandwagon fans who left Game 6 early because they thought their team was done and seeing them try and get back into the arena,proving once and for all to me that they only care about this team if LeBron James is on it.

I really wanted to see two other teams in the Finals,you know,just to shake things up a bit. I think a lot of fans would like that same thing as well as ratings for the playoffs and the Finals have been at all-time lows in recent years. If the Pacers and Thunder were in, I’d probably be more inclined to watch, but since it’s the same teams that were in last year, I’ll see what else is on.

The Stanley Cup Finals are set and the New York Rangers will face the Los Angeles Kings. I think this will be a great final between an Original Six team that has been a surprise this postseason that wants to win their first Cup in 20 years and a Kings team that has not yet quit and is looking for it’s second Cup in three years.

We’ve also got a great match-up with the goaltenders in Henrik Lundqvist and Jonathan Quick. If you ask me, I think the Kings will win this thing in seven games. They took the Sharks to seven games after being down 3-0 in that series, they took on the Ducks and prevailed and they dethroned the Blackhawks. As great of a story the Rangers have been this postseason, I think the Kings just have something brewing that just can’t be duplicated.

Finally, the longest race of the Triple Crown, the Belmont Stakes, takes place Saturday in Elmont, New York and Yuba City’s own California Chrome is looking to do what no horse since 1978 has done, win the Triple Crown. He wowed everyone at the Kentucky Derby and just barely won the Preakness Stakes and now the chance to end the longest Triple Crown drought in the history of horse racing and I hope he does it. This story of this horse has been so fun to watch and the fact that he is a local horse makes it even better.

I will be watching (or at least I hope I am able to) to see if Chrome takes home some Triple Crown gold.

Top Eight Ways Dumb Voters Decide Who to Vote For

From the T.J. the Sports Geek Quarantine Center and Beverage […]
Top Eight Ways Dumb Voters Decide Who to Vote For