In their 7-6 win over Arizona on Thursday, the Dodgers decided to celebrate their division championship in the pool that resides in right center field at Chase Field. Many Diamondbacks were not happy with that.

“I just think they have enough guys on that team that it’s surprising they would allow that to happen,” Diamondbacks infielder Willie Bloomquist said. “I’ll give credit where credit’s due. They won the division, so congratulations to them. I would expect someone to act with a little more class. I highly doubt the New York Yankees would do something like that.”

I also think it was a bit over the top for the Dodgers to do this and it is not because I am a Giants fan. If the Pittsburgh Pirates had done this,I would also be calling them out on it.

Look, if you want to celebrate in the locker room spraying champagne on one another, that’s fine. But to do this in that part of the park, and of a team that you have had bad blood with this season? Unacceptable.

Something tells me that the Diamondbacks will not forget what happened and it may carry over into next season in brawl form. It’s not a 2014 prediction (Those come out on December 27), but if it does happen, you heard it here first. 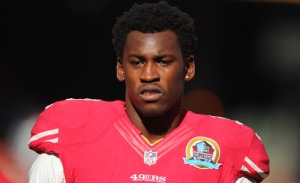 On Friday, 49ers linebacker Aldon Smith was arrested on suspicion of DUI in San Jose after crashing his truck into a tree. Smith was not hurt and he was later released on bail. Smith played on Sunday in a 27-7 loss to the Indianapolis Colts.

In a statement released Friday morning, the team said: “The 49ers organization is aware of the matter involving Aldon Smith. As we continue to gather information regarding this situation, we will have no further comment.”

Smith should not have played on Sunday. If anything, the 49ers should have done everything they needed to do to get him the help he needs in order to be the top player he has been. In the meantime, I hope Smith receives a wake-up call from this. What he did is not okay.

He could have killed someone, including himself. I hope the league and the 49ers take these matters seriously and I hope coach Jim Harbaugh becomes more of a disciplinarian. It is clear to me he isn’t that and a coach like him needs to be if his team, now 1-2 on the year, wants to get back to the Super Bowl.

What do you know? Trading Trent Richardson did pay off for the Browns. Well,this week it did.

Look, I am in the majority of people who thought the Browns made a mistake in the long term by trading the third overall pick from last season, but this week the Browns did something I thought they would maybe not do at all this season, they won the game.
Cleveland got past a fledgling Vikings team 31-27 on Sunday. Brian Hoyer looked great in place of the injured (and old) Brandon Weeden. Jordan Cameron had three touchdowns.

In spite of all that, the Browns may have been smarter to keep Richardson. Though it was the newest member of the Colts who told Cleveland fans on his way out to not give up on this team. What a classy guy to say that about the team he was leaving. Stay tuned! 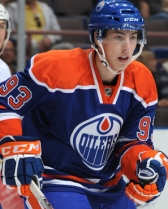 The Oilers have locked up another one of their young stars in Ryan Nugent-Hopkins to a seven year, $42 million contract on Friday.
Nugent-Hopkins,20, had an injury riddled 2013 season, but Oilers GM Craig MacTavish has seen enough of him to know that he wants him in an Oilers uniform for several years to come.

“I definitely want to come back and play my best whenever I am ready to play,” Nugent-Hopkins said. “I’m just happy to be here, to be locked up for the next so many years.

This is an absolutely great move for the Oilers. They have not been to the playoffs in seven years and the team knows who they want to be there for them in the long haul to get back to the postseason and with Jordan Eberle and Taylor Hall locked up along with Nugent-Hopkins, they are looking to make big waves this season and beyond and I think they will.